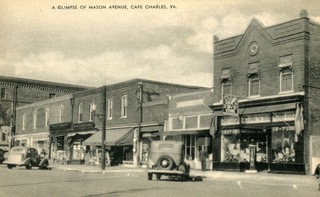 History of Cape Charles: From Railroad Roots to the Happiest Seaside Town

One of North America’s earliest colonized regions, the Eastern Shore of Virginia was primarily made up of scattered small towns focused on seafood and agriculture until the 1880s. Back then, the land that would become the town of Cape Charles was nothing more than farmlands and wetlands. But change was on the horizon — within just a few years, the Bay Coast Railroad would transform the area from a small agricultural community to a bustling railroad town.

In 1882, William L. Scott (a congressman from Erie, Pennsylvania) and Alexander Cassatt (then an engineer with Pennsylvania Railroad) hatched a plan to extend the existing Pennsylvania Railroad line another 65 miles from Pocomoke, Maryland to a point on the Chesapeake Bay. Their goal: to establish a route that could move goods transported by rail across the Chesapeake Bay to Norfolk. It was this new railroad line that led to the establishment of Cape Charles.

In 1883, Scott purchased three plantations comprising approximately 2,509 acres from the heirs of former Virginia Governor Littleton Waller Tazewell. Of this land, 136 acres went to create the town of Cape Charles. From its very conception, Cape Charles was a planned community. In 1884, Scott commissioned two engineers to do the official mapping of the town, which was approximately 136 acres divided into 644 equal lots. Seven avenues extending from east to west were named for Virginia statesmen; the streets extending north and south were named for fruits and trees. The original layout of the town is still visible today.

By October 1884, the railroad’s first passenger and freight trains began running. Within six months, two passenger steamers, as well as specially designed railroad freight barges, were regularly making the 36-mile Bay crossing. Trains soon arrived daily from New York, and the Eastern Shore’s towns prospered as their produce could easily be exported to metropolitan areas. By 1885, the first residential and commercial buildings were established in Cape Charles along with a volunteer fire department, a newspaper, a school, and multiple churches. Paved streets, electricity, telephones, and a central water and sewage system made the town more cosmopolitan than others on the Eastern Shore. Members of older county families were attracted to the town and built their homes among those of the railroad employees.

In 1911, wetlands near the Chesapeake Bay were drained and filled. The original east-west avenues were extended west, and two more north-south streets were added: Bay Avenue along the edge of the Bay and Harbor Avenue between Bay Avenue and Pine Street. The additional 38 acres of filled land provided 97 new building lots.

The town continued to grow and develop throughout the golden age of railroads, through World War II with its mission of ferrying troops and supplies, and into the 1950s until the auto ferry was moved to Kiptopeke. At the town’s peak period of development in the early 1900s, as many as 300 cars per day were transported through the Cape Charles harbor. In 1958, the last passenger train left Cape Charles.

With the decline of the railroad industry following World War II and the increase of local truck shipping resulting from the opening of the Chesapeake Bay Bridge-Tunnel in 1964, Cape Charles experienced an economic downturn, forcing many to leave town to find jobs elsewhere. The town experienced severe deterioration over the next few decades.

The entire Cape Charles Historic District was listed on the National Register of Historic Places in 1991. Since then, historical home lovers have been discovering the town’s charms, and it’s proven to be an extremely desirable location for retirees and young families alike. Since the early ’90s, Cape Charles has transformed from a deteriorating community with more than 90 percent of the community in need of rebuilding to a thriving community with about 10 percent of the historic homes needing restoration.

Cape Charles has seen an increase in its economic prosperity over the last several years and has experienced a great deal of growth. Its deep-water harbor, pristine beaches, and quaint Victorian architecture have attracted many new visitors, residents and businesses. The establishment of Bay Creek Golf Club, a new Yacht Center and the re-opening of the once closed concrete plant are creating the new jobs needed to continue its resurgence.

The most dramatic shift occurred in 2018 when Cape Charles welcomed 14 new commercial businesses, with an additional eight joining the ranks in 2019. The economic vitality of the Cape Charles commercial district is currently thriving with new residents and a significant increase in overnight and day-tripping visitors drawn to this idyllic town nestled on the shores of the Chesapeake Bay.